All Collections
Power Tools
Scoring
An Introduction to Scoring

An Introduction to Scoring

Written by Patrick Brothers
Updated over a week ago

Teams define a scoring rubric by selecting up to five criteria and assigning weights to each one.

Each member of the team can then score each organization, person or country on the agreed rubric. A user is not shown scores from any other user in the team until they have registered a score themselves to avoid bias or influence from their own independent assessment.

However, as soon as the user's first score is submitted, the Scoring Fingerprint is shown which shows the users their own score, overlaid with other team members who have scored.

Based on the weights assigned to each criteria, an overall score out of 100 is also shown on the fingerprint.

To refine each criteria, the user just drags the criteria to the desired score which is recorded and the overall score is recalculated immediately. 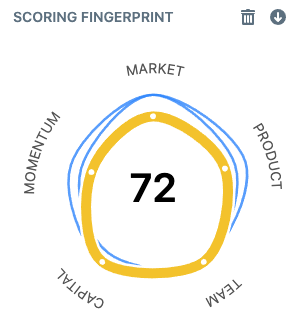 This coloring allows very rapid feedback for a team on the strengths of individual organizations or people they are evaluating at a glance.

When users are navigating the platform, organization cards show the team's consensus assessment as a scoring fingerprint along with the average weighted total score for that item. Users who have not scored an item yet are still shown these scoring cards, however, the scores are not shown when the user clicks into the organization or person profile in order to help the user conduct an independent evaluation.

As teams build-up a high-value bank of scoring data, the platform provides critical feedback tailored to each individual user about how they are scoring in aggregate compared to peers.

The line shows the relative distribution of scores by the user's own scoring. This tells a user if they are scoring 'high' or 'low' or 'in sync' with the rest of their team. 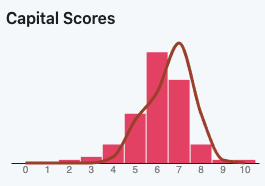 This is critical feedback to a user and for their entire team. It serves as a trigger to re-calibrate not only how and what considerations they are taking into account when evaluating an organization or person, but also drives continuous improvement of the criteria and weighting as the team refines and codifies their assessment.

Did this answer your question?